This invaluable compact reference guide is the perfect gift for any piano teacher, student, and performer. 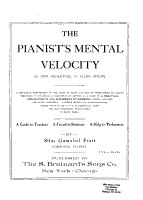 "The book is a comprehensive examination of John Cage's seminal Concert for Piano and Orchestra. It places the piece into its many contexts, examining its relationship with Cage's compositional practice of indeterminacy more generally, the importance of Cage's teacher, Arnold Schoenberg, on the development of his structural thought, and the impact of Cage's (mis)understanding of jazz. It discusses, on the basis of Cage's sketches and manuscripts, the compositional process at play in the piece. It details the circumstances of the piece's early performances-often described as catastrophes-its recording and promotion, and the part it played in Cage's (successful) hunt for a publisher. It examines in detail the various ways in which Cage's pianist of choice, David Tudor, approached the piece, differing according to whether it was to be performed with an orchestra, alongside Cage delivering the lecture, 'Indeterminacy', or as a piano solo to accompany Merce Cunningham's choreography Antic Meet. It demonstrates the ways in which, despite indeterminacy, the instrumental parts of the piece are amenable to analytical interpretation, especially through a method which exposes the way in which those parts form a sort of network of statistical commonality and difference, analysing, too, the pianist's part, the Solo for Piano, on a similar basis, discussing throughout the practical consequences of Cage's notations for a performer. It shows the way in which the piece played a central role, first, in the construction of who Cage was and what sort of composer he was within the new musical world but, second, how it came to be an important example for professional philosophers in discussing what the limits of the musical work are"--

Guide to the Pianist’s Repertoire continues to be the go-to source for piano performers, teachers, and students. Newly updated and expanded with over 250 new composers, this incomparable resource expertly guides readers to solo piano literature. What did a given composer write? What interesting work have I never heard of? How difficult is it? What are its special musical features? How can I reach the publisher? It’s all here. Featuring information for more than 2,000 composers, the fourth edition includes enhanced indexes. The new "Hinson" will be an indispensable guide for many years to come.