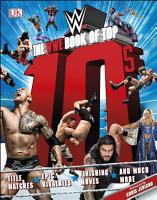 From the top 10 Champions to the most popular matches ever, WWE: Book of Top 10s ranks everything in the world of WWE in fun and bite-sized lists. WWE: The Book of Top 10s is packed with information and trivia and will provide hours of ammunition and controversy as fans debate the lists, arguing positioning, surprise inclusions, and snubs from 100 lists spanning five decades of sports entertainment history. The greatest stars from WWE's past and present are featured, including John Cena, Dean Ambrose, Undertaker, The Rock, Stone Cold Steve Austin, Triple H, Andre the Giant, Randy "Macho Man" Savage, and so many more.

Multi-time W . . . W . . . E! (WWE) TAG! TEAM! CHAMPIONS! The New Day want you to feel the power!! And now you can with The Book of Booty: Shake It. Love It. Never Be It. From the purveyors of positivity themselves, each chapter of this handy guide will help you embrace the New Day way of life. Even if you’re feeling booty—and who (who?! who?! who?! who?! who?!) has never felt booty? —you’ll be clapping, gyrating, and radiating positivity like the New Day themselves. Fans will learn: * The New Day’s official definition of “booty,” and the telltale signs that you or a loved one might be booty * The proper attire and headwear for the new you * How to twerk like a man * What your spirit animal says about you * How to project positivity By the time you finish this book, you'll be a rainbow-gazing, trombone-playing, unicorn-loving soldier of positivity, ready to take on nefarious WWE tag teams with a smile on your face. Pro tip: Eat your Booty O’s every morning for added strength!