Originally published on the eve of the 1848 European revolutions, The Communist Manifesto is a condensed and incisive account of the worldview Marx and Engels developed during their hectic intellectual and political collaboration. Formulating the principles of dialectical materialism, they believed that labor creates wealth, hence capitalism is exploitive and antithetical to freedom.

A specter is haunting Europe: The book about wealth, work, and society that revolutionized economic and political thought. In 1848, as revolutionary uprisings were spreading across Europe, a document was drawn up that viewed history in a new way—through the lens of class struggle. Arguing that power and wealth had always been concentrated in the hands of the few, who exploited the labor of the many, The Communist Manifesto examined the relationships between owners and workers, the proletariat and the bourgeoisie, and argued that capitalism contained the seeds of its own eventual destruction. The manifesto would go on to become one of the most influential works in modern history—its core ideas still discussed and debated today as governments rise and fall, and individuals and organizations continue to strive for solutions to the problem of the haves versus the have-nots.

The Communist Manifesto, originally the Manifesto of the Communist Party (German: Manifest der Kommunistischen Partei), is an 1848 political document by German philosophers Karl Marx and Friedrich Engels. Commissioned by the Communist League and originally published in London just as the Revolutions of 1848 began to erupt, the Manifesto was later recognised as one of the world's most influential political documents. It presents an analytical approach to the class struggle (historical and then-present) and the conflicts of capitalism and the capitalist mode of production, rather than a prediction of communism's potential future forms.The Communist Manifesto summarises Marx and Engels' theories concerning the nature of society and politics, namely that in their own words "the history of all hitherto existing society is the history of class struggles". It also briefly features their ideas for how the capitalist society of the time would eventually

Edited by Samuel H. Beer, with key selections from Capital and The Eighteenth Brumaire of Louis Bonaparte, this volume features an especially helpful introduction that serves as a guide to Marxist political and economic theory and to placing the specific writings in their contemporary setting.

The political tract in which Marx presented the core of his philosophy and revolutionary program, with an introduction analyzing its significance to the realities of today and to Marx's own times. 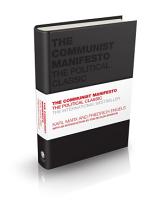 The Communist Manifesto is one of the most important political texts in history. Its stirring and even poetic language helped it become a vital document in the spread of socialist ideas. Karl Marx & Friedrich Engels argued that exploitation and suffering will not end until the whole class structure, which ensures people are treated as profitable commodities, is destroyed. Marx’s Das Capital provides the theory behind socialism, but it was The Communist Manifesto that sparked revolutions. This collectible, hard-back edition of The Communist Manifesto includes an insightful introduction by series editor and self-help expert Tom Butler-Bowdon, and is an important addition to the bestselling Capstone Classics. The Communist Manifesto: The Political Classic is a must-have for readers interested in political history, and will be of great value to everyone interested in the key questions of radical politics today.

Featuring an appendix of discussion questions, the Diversion Classics edition is ideal for use in book groups and classrooms. Originally titled Manifesto of the Communist Party, this 1848 publication was commissioned by the Communist League to outline their purposes. Penned by political theorists and social scientists Karl Marx and Friedrich Engels, it is considered one of the most influential political texts in existence. Addressing issues of class struggle, it centers on the suffering of the working class at the hands of the bourgeoisie and calls for an end to inheritance, as well as all private property. This revolutionary short work has since provided the basis for the political systems of many different countries, with concepts like a progressive income tax and free education for citizens, and still remains a landmark text that provokes debate on class systems around the world. For more classic titles like this, visit www.diversionbooks.com/ebooks/diversion-classics 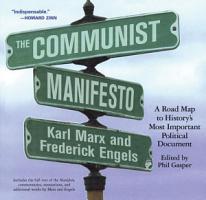 “What is globalization? Here is one of the best answers. It is the ‘constant revolutionizing of production’ and the ‘endless disturbance of all social conditions.’ It is ‘everlasting uncertainty.’ Everything ‘fixed and frozen’ is ‘swept away,’ and ‘all that is solid melts into air.’ Yes, you have read this before. It is from The Communist Manifesto, by Messrs. Marx and Engels.”—The New York Times Here, at last, is an authoritative introduction to history’s most important political document, with the full text of The Communist Manifesto by Marx and Engels. This beautifully organized and presented edition of The Communist Manifesto is fully annotated, with clear historical references and explication, additional related texts, and a glossary that will bring the text to life for students, as well as the general reader. Since it was first written in 1848, the Manifesto has been translated into more languages than any other modern text. It has been banned, censored, burned, and declared “dead.” But year after year, the text only grows more influential, remaining required reading in courses on philosophy, politics, economics, and history. “Apart from Charles Darwin’s Origin of Species,” notes the Los Angeles Times, the Manifesto “is arguably the most important work of nonfiction written in the 19th century.” The Washington Post calls Marx “an astute critic of capitalism.” Writing in The New York Times, Columbia University Professor Steven Marcus describes the Manifesto as a “masterpiece” with “enduring insights into social existence.” The New Yorker recently described Karl Marx as “The Next Thinker” for our era. This book will show readers why. Phil Gasper is a professor of philosophy at Notre Dame de Namur University in northern California. He writes extensively on politics and the philosophy of science and is a frequent contributor to CounterPunch.