Saks managed to achieve both professional and personal success in spite of being diagnosed as schizophrenic and given a "grave" prognosis. In this memoir, she frankly and movingly discusses the disease, and the treatments that helped her to cope and thrive. 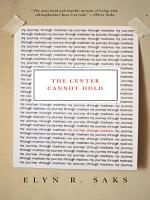 A much-praised memoir of living and surviving mental illness as well as "a stereotype-shattering look at a tenacious woman whose brain is her best friend and her worst enemy" (Time). Elyn R. Saks is an esteemed professor, lawyer, and psychiatrist and is the Orrin B. Evans Professor of Law, Psychology, Psychiatry, and the Behavioral Sciences at the University of Southern California Law School, yet she has suffered from schizophrenia for most of her life, and still has ongoing major episodes of the illness. The Center Cannot Hold is the eloquent, moving story of Elyn's life, from the first time that she heard voices speaking to her as a young teenager, to attempted suicides in college, through learning to live on her own as an adult in an often terrifying world. Saks discusses frankly the paranoia, the inability to tell imaginary fears from real ones, the voices in her head telling her to kill herself (and to harm others), as well as the incredibly difficult obstacles she overcame to become a highly respected professional. This beautifully written memoir is destined to become a classic in its genre.

In this spectacular, thought-provoking epic of alternate history, Harry Turtledove has created an unparalleled vision of social upheaval, war, and cutthroat politics in a world very much like our own—but with dramatic differences. It is 1924—a time of rebuilding, from the slow reconstruction of Washington’s most honored monuments to the reclamation of devastated cities in Europe and Canada. In the United States, the Socialist Party, led by Hosea Blackford, battles Calvin Coolidge to hold on to the Powell House in Philadelphia. And it seems as if the Socialists can do no wrong, for the stock market soars and America enjoys prosperity unknown in a half century. But as old names like Custer and Roosevelt fade into history, a new generation faces new uncertainties. The Confederate States, victorious in the War of Secession and in the Second Mexican War but at last tasting defeat in the Great War, suffer poverty and natural calamity. The Freedom Party promises new strength and pride. But if its chief seizes the reins of power, he may prove a dangerous enemy for the hated U.S.A. Yet the United States take little note. Sharing world domination with Germany, they consider events in the Confederacy of little consequence. As the 1920s end, calamity casts a pall across the continent. With civil war raging in Mexico, terrorist uprisings threatening U.S. control in Canada, and an explosion of violence in Utah, the United States are rocked by uncertainty. In a world of occupiers and the occupied, of simmering hatreds, shattered lives, and pent-up violence, the center can no longer hold. And for a powerful nation, the ultimate shock will come when a fleet of foreign aircraft rain death and destruction upon one of the great cities of the United States. . . .

A memoir of paranoid schizophrenia by an accomplished professor recounts her first symptoms at the age of eight, her efforts to hide the severity of her condition, and the obstacles she has overcome in the course of her treatment and marriage.