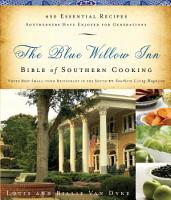 "It's Ecstasy come Dixie." —Southern Living The Most Extensive Collection of Southern Recipes Ever in One Book Voted Southern Living magazine's 1996 Reader's Choice Award for best small-town restaurant in the South and the "Best in the South" for six years straight, the Blue Willow Inn is the quintessential eatery for fans of traditional Southern cuisine. Now, you can recreate the Blue Willow Inn experience in your own kitchen with over 600 classic Southern recipes, including: Blue Willow Inn's Famous Fried Green Tomatoes (page 170) Chicken and Dumplings (page 90) Virginia's Vidalia Onion Dip (page 58) Kudzu Blossom Jelly (page 83) Mom's Sweet Potato Casserole (page 194) Alabama "Blue Ribbon" Banana Pudding (page 342) Southern Fried Chicken (page 247) Thanks to proprietor Billie Van Dyke, as well as cooks from all over the South, you can now experience the culinary wonders of the Blue Willow Inn's delectable taste in your very own kitchen. Recipes passed down from generation to generation, adapted and enhanced through the years, have been collected into the most comprehensive collection of Southern recipes ever published.

Voted "Southern Living" magazine's 1996 Reader's Choice Award for best small-town restaurant in the South - as well as making the "Best in the South" list for six years straight - The Blue Willow Inn is the quintessential eatery for fans of traditional Southern Cuisine.

What is American food? From barbecue to Jell-O molds to burrito bowls, its history spans a vast patchwork of traditions, crazes, and quirks. A close look at these foods and the recipes behind them unearths a vivid map of American foodways: how Americans thought about food, how they described it, and what foods were in and out of style at different times. In Food on the Page, the first comprehensive history of American cookbooks, Megan J. Elias chronicles cookbook publishing from the early 1800s to the present day. Following food writing through trends such as the Southern nostalgia that emerged in the late nineteenth century, the Francophilia of the 1940s, countercultural cooking in the 1970s, and today's cult of locally sourced ingredients, she reveals that what we read about food influences us just as much as what we taste. Examining a wealth of fascinating archival material—and rediscovering several all-American culinary delicacies and oddities in the process—Elias explores the role words play in the creation of taste on both a personal and a national level. From Fannie Farmer to The Joy of Cooking to food blogs, she argues, American cookbook writers have commented on national cuisine while tempting their readers to the table. By taking cookbooks seriously as a genre and by tracing their genealogy, Food on the Page explains where contemporary assumptions about American food came from and where they might lead.

Georgia is a thoroughly modern state, known for its vibrant culture and bustling economy. Despite this veneer of normalcy, strange legends lurk around every corner. Former president Jimmy Carter's family consulted a psychic in an attempt to find one of the farm's wayward dogs. A Hall County ranch was plagued by mysterious cattle mutilations made with surgical precision. Eggs, alligators, turtles and frogs have rained down from the heavens across the state, from Columbus to Savannah. Evidence suggests that ancient seafarers regularly visited the Peach State centuries before Columbus reached the New World. Author Jim Miles explores these and many more in a collection of stories that can be found only in the Peach State.