A second edition of this famous survey has been eagerly awaited. When the first edition appeared Brezhnev was still in power, Gorbachev did not make it to the index, and the USSR was a superpower. Today the Soviet experiment is over and the USSR no longer exists. How? Why? Martin McCauley has reworked and greatly expanded his book to answer these questions, and to provide a complete account of the Soviet years. Essential reading to an appreciation of recent history -- and to a better understanding of whatever happens next.

'An expert in probing mafia-type relationships in present-day Russia, Martin McCauley here offers a vigorously written scrutiny of Soviet politics and society since the days of Lenin and Stalin.' John Keep, Professor Emeritus, University of Toronto. The birth of the Soviet Union surprised many; its demise amazed the whole world. How did imperial Russia give way to the Soviet Union in 1917, and why did the USSR collapse so quickly in 1991? Marxism promised paradise on earth, but the Communist Party never had true power, instead allowing Lenin and Stalin to become dictators who ruled in its name. The failure of the planned economy to live up to expectations led to a boom in the unplanned economy, in particular the black market. In turn, this led to the growth of organised crime and corruption within the government. The Rise and Fall of the Soviet Union examines the strengths, weaknesses, and contradictions of the first Marxist state, and reassesses the role of power, authority and legitimacy in Soviet politics. Including first-person accounts, anecdotes, illustrations and diagrams to illustrate key concepts, McCauley provides a seminal history of twentieth-century Russia.

Geoffrey Hosking traces the evolution of the Soviet political system from its revolutionary origins in 1917 to the collapse instigated by Gorbachev's perestroika. 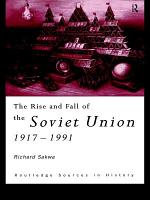 Through sources and documents, The Rise and Fall of the Soviet Union by Richard Sakwa places the Soviet experience in historical and comparative context. The author introduces each source in this volume fully and provides commentary and analysis. Using eye-witness accounts, official documents and new materials which have just come to light, Richard Sakwa gives an historical overview of the Soviet Union from the revolution of 1906 to the fall of the regime.

Details the evolution of Sovietism over seventy-four years from its origins to its end in 1991.

"...that rare thing, a piece of careful scholarship that is also superby entertaining...Starr, who is president of Oberlin College and has been associated with the Kennan Institute for Advanced Russian Studies, is also a professional jazz musician, and his knowledgeable affection for the music shines through the text." - Andrea Lee, New York Times Book Review 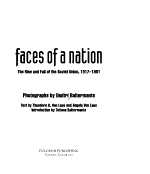 The Cold War focuses on the tumultuous relationship between the U.S. and the former Soviet Union, offering a new perspective on the great rivalry between the two countries. The text examines the crystallization of the Cold War between the two superpowers following the radically divergent paths they took after 1917, highlighting the domestic politics, diplomatic maneuvers, and even the psychological factors that bound the two countries in conflict. Powaski paints a portrait of each new development and how it added to their rivalry. He looks at the Marshall Plan, the communist coup in Czechoslovakia, the Berlin blockade, the formation of NATO, and the first Soviet nuclear test. Throughout, Powaski stresses the events of special interest to America, including the Vietnam War, the Arms Race, and the domestic effects of the superpower competition. He challenges students to think of the Cold War in new ways, arguing that the roots of the conflict are centuries old, going back to Czarist Russia and the very infancy of the American nation. He explains that while both Russia and America were expansionist nations, each believed it possessed a unique mission in history. Because Americans perceived the Russian government (whether Czarist or Bolshevik) as despotic and Russians saw the United States as conspiring to prevent it from reaching its goals, Soviet American relations, difficult before World War II, escalated dramatically after both nations emerged as the world's major military powers. Powaski discusses the onset of the Cold War under Truman and Stalin, its globalization under Eisenhower and Khrushchev, and the latter-day episodes of confrontation and detente. Powaski gives credit to Reagan and especially to Bush in facilitating the Soviet collapse, but also notes that internal economic failure, not outside pressure, proved decisive in the Communist failure. He also offers a clear assessment of the lasting distortions the struggle wrought upon American institutions, raising the important question of whether anyone really won the war. With clarity, fairness, and insight, Powaski offers the most comprehensive survey to date of the Cold War, exploring its origin in the early 20th century to its resolution under Gorbachev and Bush. Ideal for courses in world history and U.S. and Soviet foreign policy, this text is the definitive account of our century's longest international struggle.

Examines some of the less well explored areas of Soviet political and economic life to develop a feasible set of alternatives for future Soviet development and to establish which ones the system is predisposed to select.