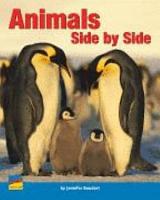 In this book, count and measure to compare characteristics of various animals.

"Side by Side," Third Edition, by Steven J. Molinsky and Bill Bliss, is a dynamic, all-skills program that integrates conversation practice, reading, writing, and listening -- all in a light-hearted, fun, and easy-to-use format that has been embraced by students and teachers worldwide. This four-level program promotes native communication between students ... practicing speaking together "side by side." New to the Third Edition are Vocabulary Preview sections in every chapter (which introduce key words in a lively picture dictionary format), "How to Say It!" lessons, "Side by Side Gazettes" ("magazine-style" pages that offer feature articles, vocabulary expansion, and cross-cultural topics), and all-new illustrations.

Friends help you mature emotionally and spiritually. Friends teach you about forgiveness. Friends love you no matter what. Carolyn Nystrom leads you through ten inductive studies to discover what the Bible teaches about friendship. As you dig into the stories of friends like David and Jonathan or Ruth and Naomi, you will experience the riches of godly friendship for yourself. This revised LifeGuide Bible Study features additional questions for starting group discussions and for meeting God in personal reflection, together with expanded leader's notes and a "Now or Later" section in each study. PDF download with a single-user license; available from InterVarsity Press and other resellers.

The Side by Side Activity Workbooks offer a variety of exercises for reinforcement, fully coordinated with the student texts. A special feature of the Activity Workbooks is the inclusion of GrammarRaps for practice with rhythm, stress, and intonation and GrammarSongs from the Side by Side TV videos. Periodic check-up tests are also included in the workbooks. Side by Side Plus is a standards-based and grammar-based English language program for adult and young-adult learners, The program builds students general language proficiency and prepares them for their life-skill roles in the community, family, school, and at work."

Matisse and Picasso influenced each other from 1905 on. This is the story of their creative rivalry, from its beginnings in the salons of Paris and under the auspices of Gertrude and Leo Stein through the years leading to World War I and beyond.

Aims to help students learn to use the language grammatically, through practice with meaningful conversational exchanges. 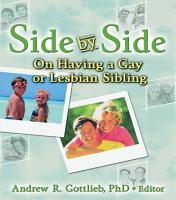 How would you react if your brother or sister came out to you? “I'm proud to have been the first to know.” “My conservative upbringing contributed to the notion that John’s behavior was sinful. The first thought I had about it was that my brother had somehow been misdirected, involving himself in the wrong crowd. How could he be gay? I was convinced we all had to help him overcome this problem. I equated being gay with having a mental disorder and thought maybe we should send him to a therapist.” “I love Beth very much. I am proud of her, thankful for her, and can’t imagine life without her.” In this first-of-its-kind book, Andrew Gottlieb, the author of Out of the Twilight: Fathers of Gay Men Speak and Sons Talk About Their Gay Fathers: Life Curves, continues his landmark exploration at the intersection of sexuality and family studies. Here he turns his thoughtful gaze to the powerful bonds of brotherhood and sisterhood to address questions such as: How are we affected by the knowledge that a sibling feels same-sex attraction, and how does that knowledge impact on our relationships with our brother or sister? How do brothers and sisters of gay/lesbian people cope with stigma and homophobia? What if there’s already a non-heterosexual sibling in the family—how does he or she react when another sibling comes out? Do each of their roles change? “Besides the fact that Lee didn’t conform to my notion of what a lesbian was (I, of course, always looked and acted the part), I wondered how this would affect my role as ’the lesbian of the family.’ . . . Would this rock the boat? Would two lesbians in the family be one lesbian too many?” In their own words, 18 men and women share their thoughts and feelings about their gay brothers and sisters. What they have to say is revealing—about themselves, about the nature of sibling relationships, and about their role as peacemakers. Gay men and lesbian women often disclose their sexuality to their siblings before anyone else in their families. Side by Side examines the impact of a brother or sister coming out and of the way that a gay person’s siblings are sometimes placed in the position of being a social/moral bridge between the generations. “Clearly Tina has been a major force in my life, and it doesn’t just end with me. My three children and husband have all learned by Tina’s example; we all do what we can to bring fairness and equality to everyone. With a smile on my face, I occasionally say to Tina, ’Look what you’ve done to me!’ Without her, I would never be where I am or who I am.” The contributors to Side by Side come from varying religious and economic backgrounds. In plain language that is easily accessible to most adolescents and adults, they candidly relate the experience of what it was like to find out about their sibling’s homosexuality and how that knowledge affected them over time. Some of their perspectives may surprise you. Many will move you. You’ll also find a list of suggested readings and a list of organizations offering support and information for siblings of gay, lesbian, bisexual, and transgender people.