A compellingly candid memoir that details Jackson's life in seclusion, by the bodyguards who were with him in his final days - with a new introduction to commemorate the tenth anniversary of Michael Jackson's death . Hounded by the tabloid media, driven from his self-made sanctuary, Neverland, Michael Jackson spent his final years moving from city to city, living with his three children in virtual seclusion - a futile attempt to escape a world that wouldn't leave him alone. During that time, two men served as the singer's personal security team: Bill Whitfield, a former cop and veteran of the security profession, and Javon Beard, a brash, untested rookie, both single fathers themselves. Stationed at his side nearly 24/7, their job was to see and hear everything that transpired, and to keep everyone else out, making them the only two men who know what 60 million fans around the world still want to know: What really happened to the King of Pop? Driven by a desire to show the world who Michael Jackson truly was, Whitfield and Beard have produced the only definitive, first-person account of Michael Jackson's last years: the extreme measures necessary to protect Jackson and his family, the financial struggles that led their pay to be suspended for weeks at a time, the simple moments of happiness they managed to share in a time of great stress, the special relationship Jackson shared with his fans, and the tragic events that culminated in the singer's ill-fated comeback, This Is It. The truth is far more captivating than anything you've yet heard. An indispensable piece of pop-culture history, Remember the Time is the story of a man struggling to live a normal life under extraordinary circumstances, of a father fighting to protect and provide for his children. Remember the Time is the book that dismantles the tabloid myths once and for all to give Michael Jackson back his humanity.

Tony Mott is the Australian photographer born in the UK, who lives in Sydney and travels the world photographing the biggest rock stars in concert. This is Tony's collection of Michael Jackson photographs from the early concert days to the Thriller and History world tours. Tony was there up close as Michael Jackson hit the highs and did what he loved to do; share his music and unique magic with the world. Tony shares his stories and insights behind the photos and Michael Jackson. Jeff Jenkins and Miranda Young are two of Australia's best rock music writers. Jeff co-authored Molly Meldrum Presents 50 Years of Rock in Australia (also from Wilkinson Publishing). And with Miranda Young edits The Rock Reader: Underneath The Riffs, a collection of some of "the greatest Australian rock n roll stories ever told" by the performers and the fans.

REMEMBER THE TIME ...an intimate look inside the relationship between Michael Jackson and his real Billie Jean, Ms. Theresa J. Gonsalves, as she reveals what the others didn't! Her letter writing brought them together, now read the details in her own words through letters to Michael in his afterlife as she shares her memories through their amazing relationship. 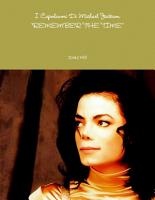 Book containing wild, crazy, outlandish moments in the life of a boy growing up in a small Wisconsin town, going to college, becoming a Wisconsin Dells Boat Pilot and Guide and a Hotel-Motel Manager during the 1950s, 1960s, 1970s and 1980s. The book is described as unbelievable, but the events really happened.

-- Provides a vision for family storytelling and practical tips for passing on stories.-- Includes dozens of inspiring examples of stories.-- A great alternative to electronic media for family entertainment.

A shattered wife with secrets and the man who has always loved her are united in this wrenchingly beautiful novel of longing, loss, and second chances from bestselling author Annette Reynolds. Since the tragic death of her famous baseball player husband, Paul Armstrong, Kate has lived a life of seclusion. Riddled with guilt, unhappiness, and secrets about her not-so-perfect marriage, Kate has turned away from everyone who cares—except Mike Fitzgerald, her neighbor and childhood best friend, a man determined to bring Kate back to the living. Mike was Paul’s best friend, too, so he kept his love for Kate a secret. He never stopped wanting her, never stopped yearning to kiss away the sadness from an unfaithful husband and too many shattered illusions. Now Mike, a successful architect, is determined to tear down Kate’s walls. He persuades her to renovate her home, providing a foothold for his deepest desire—giving her the life she deserves. Kate married the wrong man, but now the right one is going to show her what’s always been in his heart—a love that belongs to her forever. Includes a special message from the editor, as well as excerpts from these Loveswept titles: The Vow, This Fierce Splendor, The Baron, Lightning That Lingers, Tall, Dark, and Lonesome, Dream Lover, and Legends.