This book is the first scholarly study to discuss all of Vonnegut's novels against the background of his other writing, events of the 20th century, and the vast array of Vonnegut scholarship. In his novels he speaks eloquently and succinctly for his generation of Americans--the central generation of 20th-century Americans--thus making him the representative 20th-century American writer. Morse discusses how Vennegut's novels reflect the major traumatic public and private events that have gone into imagining being an American during that century, including the Great Depression, World War II, the Bomb, Vietnam, the weakening of social institutions, the vicissitudes of marriage and family, divorce, growing old, experiencing loss, and anticipating death.

Offers an examination of the works of the American science fiction writer.

Kurt Vonnegut's death in 2007 marked the passing of a major force in American life and letters. Jerome Klinkowitz, one of the earliest and most prolific authorities on Vonnegut, examines the long dialogue between the author and American culture—a conversation that produced fourteen novels and hundreds of short stories and essays. Kurt Vonnegut's America integrates discussion of the fiction, essays, and lectures with personal exchanges and biographical sketches to map the complex symbiotic relationship between Vonnegut's work and the cultural context from which it emerged—and which it in turn helped shape. Following an introduction characterizing Vonnegut as Klinkowitz came to know him over the course of their friendship, this study charts the impact of Vonnegut on American society and of that society on Vonnegut for more than a half-century to illustrate how each informed the other. Among his artistic peers, Vonnegut was uniquely gifted at anticipating and articulating the changing course of American culture. Kurt Vonnegut's America shows us that Vonnegut achieved greatness by passing his own test—opening the eyes of his audience to help them better understand their roles and possibilities in the common culture they both shared and crafted.

Presents a collection of critical essays about Kurt Vonnegut's Slaughterhouse-five. 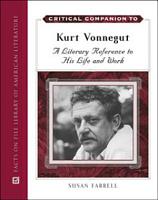 Examines the life and works of Kurt Vonnegut including detailed synopses of a variety of his works, character descriptions, important places Vonnegut lived and wrote about, biographies of family, friends, and contemporaries, and more.

Introduces the writing of contemporary American author, Kurt Vonnegut, and offers teachers ideas for bringing his works into the classroom as part of the reading and writing curriculum.

Drawing on his experiences as a young man in the Great Depression and the Second World War, Kurt Vonnegut created a new style of fiction responsive to the post-war world and unique in its appeal to both popular audiences and avant-garde critics. His work was profoundly innovative and yet perfectly lucid. In this comprehensive introductory study, originally published in 1982, Jerome Klinkowitz traces Vonnegut’s influences within the American middle class, his early efforts as a short-story writer for magazines in the 1960s and his startling and unprecedented success as a bestselling experimental novelist with Slaughterhouse-Five. His self-consciously moral posture led to readers throughout the world accepting him as their spokesman for humane values, a role which Klinkowitz considers within the context of his work.

This title profiles Kurt Vonnegut, presents an insightful portrait of his life, and examines the work and writing career of one of the literary giants of nineteenth- and twentieth-century America.

NAMED ONE OF THE BEST BOOKS OF THE YEAR BY Newsweek/The Daily Beast • The Huffington Post • Kansas City Star • Time Out New York • Kirkus Reviews This extraordinary collection of personal correspondence has all the hallmarks of Kurt Vonnegut’s fiction. Written over a sixty-year period, these letters, the vast majority of them never before published, are funny, moving, and full of the same uncanny wisdom that has endeared his work to readers worldwide. Included in this comprehensive volume: the letter a twenty-two-year-old Vonnegut wrote home immediately upon being freed from a German POW camp, recounting the ghastly firebombing of Dresden that would be the subject of his masterpiece Slaughterhouse-Five; wry dispatches from Vonnegut’s years as a struggling writer slowly finding an audience and then dealing with sudden international fame in middle age; righteously angry letters of protest to local school boards that tried to ban his work; intimate remembrances penned to high school classmates, fellow veterans, friends, and family; and letters of commiseration and encouragement to such contemporaries as Gail Godwin, Günter Grass, and Bernard Malamud. Vonnegut’s unmediated observations on science, art, and commerce prove to be just as inventive as any found in his novels—from a crackpot scheme for manufacturing “atomic” bow ties to a tongue-in-cheek proposal that publishers be allowed to trade authors like baseball players. (“Knopf, for example, might give John Updike’s contract to Simon and Schuster, and receive Joan Didion’s contract in return.”) Taken together, these letters add considerable depth to our understanding of this one-of-a-kind literary icon, in both his public and private lives. Each letter brims with the mordant humor and openhearted humanism upon which he built his legend. And virtually every page contains a quotable nugget that will make its way into the permanent Vonnegut lexicon. • On a job he had as a young man: “Hell is running an elevator throughout eternity in a building with only six floors.” • To a relative who calls him a “great literary figure”: “I am an American fad—of a slightly higher order than the hula hoop.” • To his daughter Nanny: “Most letters from a parent contain a parent’s own lost dreams disguised as good advice.” • To Norman Mailer: “I am cuter than you are.” Sometimes biting and ironical, sometimes achingly sweet, and always alive with the unique point of view that made him the true cultural heir to Mark Twain, these letters comprise the autobiography Kurt Vonnegut never wrote. Praise for Kurt Vonnegut: Letters “Splendidly assembled . . . familiar, funny, cranky . . . chronicling [Vonnegut’s] life in real time.”—Kurt Andersen, The New York Times Book Review “[This collection is] by turns hilarious, heartbreaking and mundane. . . . Vonnegut himself is a near-perfect example of the same flawed, wonderful humanity that he loved and despaired over his entire life.”—NPR “Congenial, whimsical and often insightful missives . . . one of [Vonnegut’s] very best.”—Newsday “These letters display all the hallmarks of Vonnegut’s fiction—smart, hilarious and heartbreaking.”—The New York Times Book Review