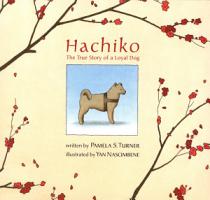 Imagine walking to the same place every day, to meet your best friend. Imagine watching hundreds of people pass by every morning and every afternoon. Imagine waiting, and waiting, and waiting. For ten years. This is what Hachiko did. Hachiko was a real dog who lived in Tokyo, a dog who faithfully waited for his owner at the Shibuya train station long after his owner could not come to meet him. He became famous for his loyalty and was adored by scores of people who passed through the station every day. This is Hachiko’s story through the eyes of Kentaro, a young boy whose life is changed forever by his friendship with this very special dog. Simply told, and illustrated with Yan Nascimbene’s lush watercolors, the legend of Hachiko will touch your heart and inspire you as it has inspired thousands all over the world. 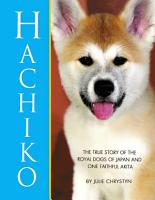 In 1924, Hachiko was brought to Tokyo by his owner, Hidesaburo Ueno, a professor in the agriculture department at the University of Tokyo. During his owner's life, Hachiko saw him off from the front door and greeted him at the end of the day at the nearby Shibuya Station. The pair continued their daily routine until May 1925, when Professor Ueno didn't return on the usual train one evening. The professor had suffered a stroke at the university that day. He died and never returned to the train station where his friend was waiting. Hachiko was given away after his master's death, but he routinely escaped, showing up again and again at his old home. After time, Hachiko realized that Professor Ueno no longer lived at the house. So he went to look for his master at the train station where he had accompanied him so many times before. Each day, Hachiko waited for Professor Ueno to return. And each day, he didn't see his friend among the commuters at the station. Hachiko became a permanent fixture at the train station, which eventually attracted the attention of commuters. Many of the people who frequented the Shibuya train station had seen Hachiko and Professor Ueno together. Realizing that Hachiko waited in vigil for his dead master, their hearts were touched. They brought Hachiko treats and food to nourish him during his wait. This continued for 10 years, with Hachiko appearing precisely when the train was due at the station. Hachiko: The Story of the Royal Dogs of Japan and One Faithful Akita is Hachiko’s story, as well as an informative look at dog culture in Japan and the history and tradition of the Akita-ken, one of the most ancient, beloved, and faithful dog breeds.

Loyal to the end, Hachi the dog, unaware that his owner had died, waited at the train station every day for the next ten years in the hopes of seeing his beloved owner come off the train like he had done so many times in the past. 15,000 first printing.

Extensive reading is essential for improving fluency and there is a real need in the ELT classroom for contemporary, low-level reading material for younger learners. The reader is based on the true story of Hachiko, the dog who kept a vigil for his owner at a train station in Tokyo for many years after his owner's death.

If you love Hachiko Dog, for sure cannot miss this Calendar !!!. EFFECTIVE: Keep track of your schedule with this cute wall calendar. This calendar will help you stay organized while expressing your personal style. DIMENSIONS: The convenient 7" x 7" size when close and 7'' x 14'' size when open makes this calendar an excellent option to hang on the wall or to use as a cute desk accessory. GRAPHIQUE: Our diverse line of high-end stationery, gift, and home essentials help elevate personal style through expert design and tailored research. Our fine collections offer the perfect combination of sophistication, fashion, and functionality. HIGH QUALITY: Made with high-quality, thick pages that are easy to write on and will not fall off your wall. FUNCTIONAL: Perfect for any home, school or office with generous writing space to organize your schedule. PERFECT GIFT: Christmas, secret santa, white elephant office party or family exchanges, coworker, friends, birthday, anniversaries or a nice thoughtful surprise. Ideal for someone who is hard to buy for, and is a great last-minute present idea.

Classics, modern fiction, non-fiction and more - the Oxford Bookworms Library has a book for every student.Written for secondary and adult students the Oxford Bookworms Library has seven reading levels from A1-C1 of the CEFR with over 270 original and adapted texts graded to ensure a comfortable read at every level. Books are available with audio and selected books are available as e-books on the Oxford Learner's Bookshelf and other platforms.