The history of reform of the House of Lords has a long history since the Parliament Act 1911, and since the House of Lords Act 1999 removed the right of all but 92 hereditary peers to sit in the Lords, there has been a number of initiatives to further the debate on reform. The latest proposals are contained in the draft Bill (Cm. 8077, ISBN 9780101807722) published in May 2011, which was referred to the Joint Committee. In this report the Joint Committee acknowledges the controversial aspects of certain of the proposals and the members of the Committee reflect wider differences of opinion, many of the report's recommendations being decided by a majority. The majority supports the need for an electoral mandate, provided the House has commensurate powers. The current functions and role would continue, but the House would probably seek to be more assertive, to an extent that cannot be predicted. The Committee recommends a House of 450 members, 80% elected on a system of Single Transferable Voting (preferably that used in New South Wales, not the one proposed in the Bill) for a 15 year term. The main sections of the report cover: functions, role, primacy of the Commons and conventions; electoral system, size, voting system and constituencies; appointments, bishops and ministers; transition, salaries, IPSA, disqualification. The Committee recommends that, in view of the significance of the constitutional change, the Government should submit the decision to a referendum.

Since its first edition in 1985, The Changing Constitution has cemented its reputation for providing concise, scholarly and thought-provoking essays on the key issues surrounding the UK's constitutional development, and the current debates around reform. The ninth edition of this highly successful volume is published at a time of accelerated constitutional change. This collection of essays brings together fourteen expert contributors to offer an invaluable source of material and analysis for all students of constitutional law and politics. It clarifies the scope of the powers exercised by central, devolved and local governments within the UK, and the relationship between Britain, the EU and other regional and international legal systems. 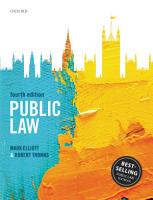 This best-selling textbook covers the essential topics of undergraduate public law modules in an insightful and interesting way. The authors capture the vibrant nature of public law in practice and the key contemporary debates in the field.

This is a draft Bill and white paper on proposals to change the House of Lords into a more democratically elected second chamber. A cross-party Committee met seven times from June to December 2010 and considered all reform issues related to the House of Lords. Agreement was reached on a large number of issues but differences in opinion remain on the size of the elected element and the type of electoral system. The Government now wants to take the discussion forward to a debate on the detail. Proposals include an 80 percent elected House of Lords but a wholly elected House of Lords has not been ruled out. The Draft Bill sets out elections using the Single Transferable Vote system but it is recognised that a case can be made for other proportional systems too. Other proposals, name, size, functions, powers and term length are some of several issues discussed.

On cover and title page: House, committees of the whole House, general committees and select committees

House of Lords reform is often characterised as unfinished business: a riddle that has been left unanswered since 1911. But rarely can an unanswered riddle have had so many answers offered, even though few have been accepted; indeed, when Viscount Cave was invited in the mid-1920s to lead a Cabinet committee on Lords reform, he complained of finding 'the ground covered by an embarrassing mass of proposals'.That embarrassing mass increased throughout the twentieth century. Much ink has been spilled on what should be done with the upper House of Parliament; much less ink has been expended on why reform has been so difficult to achieve. This book analyses in detail the principal attempts to reform the House of Lords. Starting with the Parliament Act of 1911 the book examines the century of non-reform that followed, drawing upon substantial archival sources, many of which have been under-utilised until now. These sources challenge many of the existing understandings of the history of House of Lords reform and the reasons for success or failure of reform attempts. The book begins by arguing against the popular idea that the 1911 Act was intended by its supporters to be a temporary measure. 'No one – peers included – should be allowed to pronounce about the future of the House of Lords without reading Chris Ballinger's authoritative, shrewd and readable account about reform attempts over the past century. He punctures several widely-held myths and claims in the current debate.' Rt Hon Peter Riddell CBE Director, Institute for Government and former Hansard Society chair 'This is at once an impeccably researched academic study, and a thoroughly readable account loaded with lessons for today's would-be Lords reformers.' Lord (David) Lipsey

The Stationery Office annual catalogue 2012 provides a comprehensive source of bibliographic information on over 4200 Parliamentary, statutory and official publications - from the UK Parliament, the Northern Ireland Assembly, and many government departments and agencies - which were issued in the year.

In Distilling the Frenzy, the UK's leading contemporary historian examines the special considerations that apply to writing the history of one's own times, and revisits the grand themes running through the twentieth and twenty-first centuries. He looks at Britain's persistent impulse to punch well above its weight in the world; at the sustenance of the nuclear weapons policy which has accompanied that impulse; and at the intelligence operations which underpin it. For the human perspective on these huge issues, he applies his trademark blend of scholarship and wit to assess the contrasting styles and achievements of post-war prime ministers from Clement Attlee to David Cameron. As one of Britain's foremost constitutional experts (and now a cross-bench peer) Peter Hennessy brings a unique perspective to the question of reform of the House of Lords, that irritation to the body politic once again at the very forefront of political debate. Shot through with a thread of autobiography that gives the book an especial immediacy, Distilling the Frenzy is a major work of contemporary history.

As the second chamber of the Westminster parliament, the House of Lords has a central position in British politics. But it is far less well-studied and well understood than the House of Commons. This is in part because of constant expectations that it is about to be reformed - but most Lords reform plans fail, as the Coalition government's dramatically did in 2012. Meanwhile, following a landmark change in 1999 which removed most of its hereditary members, the Lords' role in the policy process has grown. Understanding the chamber is therefore now essential to understanding politics and parliament in Britain. This book provides the first detailed portrait of the post-1999 Lords, explaining who sits in the chamber, how it operates, and crucially what policy impact it has. Its membership is shown to be more diverse and modern than many would assume, and its influence on policy to be substantial. As a 'no overall control' chamber, in which no party has a majority, it has inflicted numerous defeats on the Blair, Brown and Cameron governments, and become an important site of negotiation. It has provided a power base for the Liberal Democrats, and includes a group of almost 200 independents who now play a pivotal role. Close study of today's House of Lords demolishes some common myths about British politics, and also about how two chamber parliaments work. This book, as well as focusing on the contemporary Lords, provides a historical and comparative context for British bicameralism, asks whether the Lords can be considered 'legitimate', and describes recent reform efforts and possible future reforms.