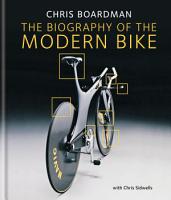 Former Olympic champion, Tour de France record holder, successful bike designer, and leader of the British Olympic Cycling Team's 'Secret Squirrels', Chris Boardman, looks at the development of the modern bike from the first experiments with gearing, through to the superbikes of today. Co-written with cycling expert Chris Sidwells, with features on components, manufacturers, designers and iconic designs, The Biography of the Modern Bike is a fascinating study of cycle design through the decades. Fully illustrated throughout, and with lively and informative text - this will make a great addition to any bike lover's bookshelves.

From the velocipede era to today's high-tech bikes, dive into the history of the bicycle. Former Olympic cycling gold medalist and world record holder Chris Boardman is among the most influential bicycle designers in the world. In Biography of the Bike, he examines the evolution of the modern bicycle from the invention of pedals to recent innovations in electronic gearing. The complete stories of each development (such as the modern derailleur) that have helped to move bike design forward, and how those inventions became established in the general marketplace, are laid out in all their fascinating detail. Complete with profiles of the riders and designers who have been at the forefront of bicycle design over the decades, the book also examines cultural trends, such as bicycle commuting and mountain biking, that have spurred advances in design. Early efforts at aerodynamic design, the standardization of the "double-diamond" frame, and the introduction of disc wheels, allow you to see the entire history of your favorite two-wheeled transport. Heavily illustrated with photos of bikes, equipment close-ups, and historical action shots of famous cyclists such as Greg Lemond, Jan Ullrich, and Fausto Coppi make this a book that no biking enthusiast, gearhead, or racing fan will want to miss!

Chris Boardman is the 2017 winner of the Cross Sports Cycling Book of the Year for his autobiography Triumphs and Turbulence. ‘The true inspiration was that Olympic gold won by Chris Boardman in Barcelona... I was so in awe of Chris Boardman’ Sir Bradley Wiggins You may know him as the much-loved co-presenter of ITV’s Tour de France coverage or enjoyed his BBC Olympic coverage, but beyond the easy charm Chris Boardman is one of our greatest, most inspiring cyclists. Boardman’s lone achievements in the 80s and 90s – Olympic track gold, the world hour record, repeatedly claiming the yellow jersey in the Tour de France – were the spark that started the modern era for British cycling. His endeavours both on and off the bike have made him the founding father of current golden generation – without him there would simply be no Hoy, Wiggins or Cavendish. It is a story full of intrigue: from Olympic success, to the famous duels with Graeme Obree and the insanity of the Tour de France. Chris became a legend for his combination of physical ability and technical preparation, almost single-handedly taking British cycling from wool shirts and cloth caps into the era of marginal gains. Indeed, after his career on the bike ended, a new chapter began as the backroom genius behind GB cycling. As head of the R&D team known as The Secret Squirrel Club, Chris has been responsible for the technical innovations that made the difference in 2012 and developed Boardman Bikes, which has become the country's bestselling premium bike range.

'A wildly inspiring adventure - from armchair to saddle.' Nichiless 'A lovely concise guide.' A. W. Baird Here is plenty of inspiration for anyone who loves to ride off road and get out into the wild and stunning scenery of the British mainland. Each route suggests further routes and the book as a whole introduces the wild cyling potential of a range of different locations. These natural routes to wild places link country lanes, green lanes, bridleways, towpaths, trails and often ancient ways between places. The book is illustrated in colour and each ride includes an annotated route map and ride profile, also OS grid references. And a fact file gives further indispensable details, including an indication of how hard each ride is, and how wild. From Chalk Cliffs and Curious Sound Mirrors in the south-east to Cape Wrath in the north-west, the purity, beauty and essential wildness of these rides will ensure that over the years many of them will become classic, even legendary cycling challenges.

In 1868, the first ever documented bicycle race was held in a Paris park, and to the locals' chagrin, was won by a Briton. Yet while cycling culture became ingrained in continental European culture, riders this side of the Channel were engaged in constant battles with the authorities to pursue their sport - road racing was in fact banned as early as 1890. Its rise in popularity over the past 150 years, and the many triumphs of British cyclists in that time, have therefore been phenomenal. Never before has the full story of the sport been documented in one book, and in Great British Cycling, Ellis Bacon guides you through the development of our bike racing world, from weekend outings to British riders being able to compete in, then finish and win stages of the Tour de France. It takes you from cycling clubs and iconic frame-builders to a post-war explosion in cycling participation inspired by the likes of Brian Robinson, Tommy Simpson, Barry Hoban and Beryl Burton, from huge crowds witnessing the Tour of Britain and other races up and down the land to the modern era of glorious success by the likes of Mark Cavendish, Bradley Wiggins and Chris Froome. As the Tour de France returns to these shores for the fourth time, with Great Britain now firmly established at the top of the world of cycling, this is the ideal time for fans of the sport, both new and old, to explore its wonderful history.

What if all the best Tour stages happened in one race? In Étape, critically acclaimed author Richard Moore weaves first-person interviews with cycling's great riders to assemble a “dream team” of the best Tour de France stages in modern history. Featuring exclusive interviews with the Tour's legends and scoundrels about their best-ever day on the bike (and their most heartbreaking defeats), Moore unravels lingering mysteries and recounts strange tales from 20 great stages of the Tour: LeMond's impossible return from near-death, Schleck's primal scream atop the Galibier, Merckx's self-described toughest Tour, Cav's mind-bending victory in Aubenas, Hinault's hellish battle with Fignon. Étape assembles the greatest days of modern Tour history into a Tour de France of incredible victory, glorious failure, shocking revelation, and beautiful memories. In the words of those who were there, Étape recreates each day vividly and reveals the beauty and the madness of cycling's greatest race.