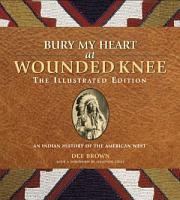 Documents, personal narratives, and illustrations record the experiences of Native Americans during the nineteenth century.

The American West, 1860-1890: years of broken promises, disillusionment, war and massacre. Beginning with the Long Walk of the Navajos and ending with the massacre of Sioux at Wounded Knee, this extraordinary book tells how the American Indians lost their land, lives and liberty to white settlers pushing westward. Woven into a an engrossing saga of cruelty, treachery and violence are the fascinating stories of such legendary figures as Sitting Bull, Cochise, Crazy Horse and Geronimo. First published in 1970, Dee Brown's brutal and compelling narrative changed the way people thought about the original inhabitants of America, and focused attention on a national disgrace.

An eloquent, fully-documented account of the systematic destruction of American Indians during the second half of the 19th century. Using council records, autobiographies and other firsthand descriptions, Dee Brown allows the great chiefs and warriors of the Dakota, Ute, Sioux and Cheyenne to tell us about the battles, massacres and broken treaties that finally left them demoralized and defeated. Sadly, this is how the west was really won.

Doumented account of the decimation of Native Americans in the last half of the 19th century, told from the Indian viewpoint.

Three powerful tales from the acclaimed chronicler of the American West—including the #1 New York Times bestseller, Bury My Heart at Wounded Knee. Two profoundly moving, candid histories and a powerful novel illuminate important aspects of the Native American story. Bury My Heart at Wounded Knee: The #1 New York Times bestseller that awakened the world to the destruction of American Indians in the nineteenth-century West, Dee Brown’s groundbreaking history focuses on the betrayals, battles, and systematic slaughter suffered by Native American tribes between 1860 and 1890, culminating in the Sioux massacre at Wounded Knee. “Shattering, appalling, compelling . . . One wonders, reading this searing, heartbreaking book, who, indeed, were the savages” (The Washington Post). The Fetterman Massacre: A riveting account of events leading up to the Battle of the Hundred Slain—the devastating 1866 conflict at Wyoming’s Ft. Phil Kearney that pitted Lakota, Arapaho, and Northern Cheyenne warriors—including Oglala chief Red Cloud, against the United States cavalry under the command of Captain William Fetterman. Based on a wealth of historical resources and sparked by Brown’s narrative genius, this is an essential look at one of the frontier’s defining conflicts. Creek Mary’s Blood: This New York Times bestseller fictionalizes the true story of Mary Musgrove—born in 1700 to a Creek tribal chief—and five generations of her family. The sweeping narrative spans the Revolutionary War, the Trail of Tears, and the Civil War—in which Mary’s descendants fought on both sides of the conflict. Rich in detail and human drama, Creek Mary’s Blood offers “a robust, unfussed crash-course in Native American history that rolls from East to West with dark, inexorable energy” (Kirkus Reviews).