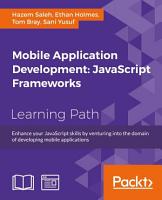 Enhance your JavaScript skills by venturing into the domain of developing mobile applications About This Book Extend your JavaScript skillset to build, test, and launch mobile apps with confidence Follow three sample projects to experience Ionic's impressive capabilities Extend the power of Apache Cordova by creating your own Apache Cordova cross-platform mobile plugins Who This Book Is For This Learning Path is for JavaScript web developers looking to develop mobile applications using various JavaScript descendent technologies. It is for anyone who wants to learn how to build fast and stylish native mobile app using the skills they already have. If you are already using React on the web, we're confident you'll be able to quickly get up and running with React Native for iOS and Android. See Ionic in action, and find out how it can transform the way you build mobile apps. What You Will Learn Develop, build, run, and deploy great cross-platform mobile applications using Apache Cordova Create complete mobile apps using Apache Cordova that runs on Apple iOS, Google Android, and Windows Phone Create a neat user interface for your mobile application using jQuery Mobile Gain an in-depth understanding of how React Native works behind the scenes Write your own custom native UI components Develop native modules in Objective-C and Java that interact with JavaScript Get to know Ionic by creating three complete mobile applications In Detail A great mobile app is rapidly becoming crucial for a huge range of businesses. With a great app, your customers or your readers don't come to you – you go with them, just a few clicks and swipes away. This Learning Path shows you how to build awesome mobile apps with some of the best tools currently being used by some of the smartest developers in the industry. Taking you through JavaScript impressive development ecosystem – from jQuery Mobile to React, through to Ionic – we'll show you how to put your skills into practice so you can build your next mobile apps with confidence and style. In this Learning Path, from jQuery to React, to Ionic, we'll cover everything you need to start In the first module you'll learn how to get stuck into Apache Cordova and find out how to use it as the key platform for developing your mobile app. It offers an efficient way to develop hybrid apps, which means you won't have to connect to platform specific APIs or use their UI framework, and can instead harness your JavaScript web development skills. Make sure you have your HTML, CSS and jQuery skills at the ready. In Module 2 we'll show you how to take advantage of React Native. It has a reputation for having a steep learning curve, but we'll make it easy for you, making sure you make full use of your existing knowledge and getting you up and running with a sample application. You'll also learn how to create components, how to create multiple screens, as well as using native UI components and accessing native APIs. In the third and final module you'll get started with Ionic. With three practical projects you can build yourself, we've made sure that you'll be learning by doing – which means you'll not only develop new skills much more quickly, but you'll have produced something tangible at the end of it! This Learning Path combines some of the best that Packt has to offer in one complete, curated package. It includes content from the following Packt products: JavaScript Mobile Application Development by Hazem Saleh Getting Started with React Native by Ethan Holmes and Tom Bray Ionic Framework By Example by Sani Yusuf Style and approach This Learning Path course provides a simple and easy way to build mobile applications in JavaScript descendent technologies such as jQuery, ReactJS, and Ionic. 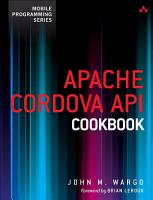 Using Apache Cordova, mobile developers can write cross-platform mobile apps using standard HTML5, JavaScript, and CSS, and then deploy those apps to every leading mobile platform with little or no re-coding. Apache Cordova API Cookbook provides experienced mobile developers with details about how each Cordova API works and how to use the APIs in their own applications. Coverage is included for all Cordova/PhoneGap 3 APIs. Instead of just showing short snippets of code to explain a particular API, this guide is chock full of complete examples. You’ll find more than thirty complete Cordova applications that work on Android, iOS, Windows, and more. The sample applications demonstrate exactly what each API does and how it works, while the chapter content describes the limitations on the leading target platforms (and even offers possible workarounds). Through realistic “cookbook” example code, mobile developer John Wargo helps you master the Cordova APIs and understand how to use them in your Cordova applications. Topics include Accelerometers, compass, and geolocation Image, video, and audio–capture, playback, and management Determining connection and device information Interacting with the Contacts application Responding to application events Accessing the device file system Globalizing apps Using the InAppBrowser Notifications Custom splash screens Special care has been taken to make the code easily readable and digestible by the reader. This guide provides the most accessible coverage, anywhere, of Apache Cordova APIs. 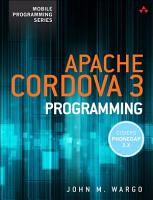 Covers PhoneGap 3.X Written for experienced mobile developers, Apache Cordova 3 Programming is a complete introduction to Apache Cordova 3 and Adobe PhoneGap 3. It describes what makes Cordova important and shows how to install and use the tools, the new Cordova CLI, the native SDKs, and more. If you’re brand new to Cordova, this book will be just what you need to get started. If you’re familiar with an older version of Cordova, this book will show you in detail how to use all of the new stuff that’s in Cordova 3 plus stuff that has been around for a while (like the Cordova core APIs). After walking you through the process of downloading and setting up the framework, mobile expert John M. Wargo shows you how to install and use the command line tools to manage the Cordova application lifecycle and how to set up and use development environments for several of the more popular Cordova supported mobile device platforms. Of special interest to new developers are the chapters on the anatomy of a Cordova application, as well as the mechanics of Cordova development. Wargo also covers the development process and the tools you can use to test and debug your Cordova applications, and provides a complete chapter that introduces the Cordova APIs, in addition to a chapter that shows you how to create your own plugins. Filled with lots of examples and code, the book includes includes complete coverage of Android, iOS, BlackBerry 1,0 and Windows Phone development for Cordova. Topics covered include How to install and use the Cordova CLI and associated tools How to configure the Android developer tools (ADT) to run, test, and debug your Cordova applications for Android How to use Xcode—Apple’s development tool for iOS development—to run, test, and debug Cordova applications for iOS devices How to use the Safari browser to debug Cordova applications on iOS devices How to use the Microsoft development tools to run, test, and debug Cordova applications for Windows Phone 8 How to set up and use the PhoneGap Build service to package Cordova applications and share those applications with others How to create Cordova plugins for both Android and iOS The author maintains a web site for the book at cordovaprogramming.com where updates, errata, and the source code for the book are available. 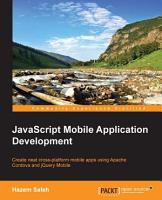 If you are a native mobile developer, with some familiarity with the common web technologies of JavaScript, CSS, and HTML, or if you are a web developer, then this learning guide will add great value and impact to your work. Learning how to develop mobile applications using Apache Cordova is of particular importance if you are looking to develop applications on a variety of different platforms efficiently. 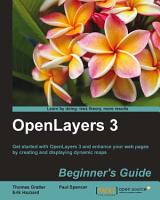 Whether you are a hobbyist or a professional web developer, if you wish to use maps on your website, then this book is for you. A basic understanding of JavaScript will be helpful, but is not necessary. If you've never worked with maps before, this book will introduce you to some common mapping topics and will guide you through the OpenLayers library. Experienced developers can also use this book as a reference to OpenLayers 3 components and to further enhance their knowledge. 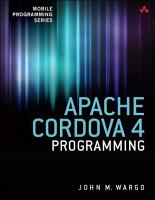 Using Apache Cordova 4, you can leverage native technologies and web standards to quickly build cross-platform apps for most mobile devices. You can deliver a high-end user experience where it matters, while radically simplifying code maintenance and reuse. Apache Cordova 4 Programming is the most concise, accessible introduction to this remarkable technology. In this essential guide, expert mobile developer John Wargo quickly gets you up to speed with all the essentials, from installation, configuration, and tools, to building plugins and using Cordova’s powerful APIs. Wargo helps you make the most of Cordova 4’s major enhancements, while offering practical guidance for all versions, including Adobe PhoneGap. Full chapters are dedicated to five major mobile platforms: Android, iOS, Windows Phone, Firefox OS, and Ubuntu. Using rich, relevant examples, Wargo guides you through both the anatomy of a Cordova app and its entire lifecycle, including cross-platform testing and debugging. Throughout, he illuminates Cordova development best practices, streamlining your development process and helping you write high-quality apps right from the start. Topics include Installing and configuring Cordova’s development environment Working with the Cordova command line interfaces Creating Cordova plugins, using Plugman and the PhoneGap CLI Cordova’s support for Firefox OS and Ubuntu devices Automation (Grunt and Gulp) and Cordova CLI hooks Microsoft’s hybrid toolkit for Visual Studio Third-party tools, such as AppGyver, GapDebug, THyM, and more Beautifying Cordova apps with third-party HTML frameworks, such as Bootstrap, OpenUI5, Ionic, and Onsen UI Running, testing, and debugging Cordova apps on each major mobile platform Access the full code examples at cordova4programming.com, where you’ll also find updates reflecting Cordova’s continuing evolution. This book is an ideal companion to Wargo’s authoritative collection of Apache Cordova code recipes for each Cordova API, Apache Cordova API Cookbook (Addison-Wesley, 2015).