The bestselling author of Neverwhere returns with his biggest, most commercial novel yet—a tour de force of contemporary fiction A master of inventive fiction, Neil Gaiman delves into the murky depths where reality and imagination meet. Now in American Gods, he works his literary magic to extraordinary results. Shadow dreamed of nothing but leaving prison and starting a new life. But the day before his release, his wife and best friend are killed in an accident. On the plane home to the funeral, he meets Mr. Wednesday—a beguiling stranger who seems to know everything about him. A trickster and rogue, Mr. Wednesday offers Shadow a job as his bodyguard. With nowhere left to go, Shadow accepts, and soon learns that his role in Mr. Wednesday’s schemes will be far more dangerous and dark than he could have ever imagined. For beneath the placid surface of everyday life a war is being fought —and the prize is the very soul of America.

Collected together for the first time, the extraordinary American Gods quartet from bestselling author and master storyteller Neil Gaiman. Award-winning, internationally acclaimed, beloved by readers everywhere and now an Emmy-nominated Amazon Prime TV series, this epic world is perfect for fans of His Dark Materials, Game of Thrones and Terry Pratchett. 'Original, engrossing and endlessly inventive' George R.R. Martin 'Gaiman is god in the universe of story' Stephen Fry Step into a kaleidoscopic world where gods walk among us, and prepare to believe. Embark on a meandering road trip which is part thriller, part murder mystery, part romance - and everything in between. What did people first believe when they came to America? And what happened to the myths they believed in? Two novels and two novellas from storytelling genius Neil Gaiman: AMERICAN GODS. ANANSI BOYS. THE MONARCH OF THE GLEN. BLACK DOG. Praise for Neil Gaiman: 'Gaiman's achievement is to make the fantasy world seem true' The Times 'Gaiman is, simply put, a treasure-house of story, and we are lucky to have him' Stephen King 'Fantasy rooted in the darkest corners of reality' Independent on Sunday 'In prose that dances and dazzles, Gaiman describes the indescribable' Susanna Clarke 'One of the best fabulists of our age' Financial Times 'A rich imagination . . . and an ability to tackle large themes' Philip Pullman 'His mind is a dark, fathomless ocean, and every time I sink into it, this world fades, replaced by one far more terrible and beautiful in which I will happily drown' New York Times Book Review 'Neil Gaiman is a star. He constructs stories like some demented cook might make a wedding cake, building layer upon layer, including all kinds of sweet and sour in the mix' Clive Barker

AMERICAN GODS by international bestseller, and creator of Sandman, Neil Gaiman is an award-winning epic novel, highly acclaimed major TV series starring Ricky Whittle, Ian McShane and Gillian Anderson and now, for the first time, adapted in stunning comic book form. This is the final of three bind-up editions. 'Original, engrossing and endlessly inventive' - George R. R. Martin. The final confrontation between new and old gods, with humanity caught in the middle. The new and old gods agree to meet in the centre of America to exchange the body of the old gods' fallen leader - heading towards the inevitable god war in this final arc to the bestselling comic series. This volume collects the third nine issues of the seminal American Gods comic book series.

AMERICAN GODS by international bestseller, and creator of Sandman, Neil Gaiman is an award-winning epic novel, highly acclaimed major TV series starring Ricky Whittle, Ian McShane and Gillian Anderson and now, for the first time, adapted in stunning comic book form. This is the first of three bind-up editions. 'A must for any fan of American Gods or the work of Neil Gaiman... [sitting] alongside the TV series and the novel as another way to tackle and understand Gaiman's deep, rich narrative' Starburst Shadow Moon gets out of jail only to discover his wife is dead. Defeated, broke and uncertain where to go from here, he meets the mysterious Mr. Wednesday, who employs him to serve as his bodyguard - thrusting Shadow into a deadly world where ghosts of the past come back from the dead, and a god war is imminent. 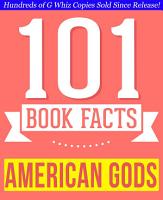 Did you know the when Gaiman was sixteen years old, he and his two friends started a magazine called Metro? They were able to sell the magazine in local record and bookstores in Croydon. Or did you know in May 2010, American Gods was chosen as the first selection for the One Book, One Twitter (1b1t) book club? What are the amazingly true facts behind American Gods by Neil Gaiman? Do you want to know the golden nuggets of facts readers love? If you've enjoyed the book, then this will be a must read delight for you! Collected for readers everywhere are 101 book facts about the book & author that are fun, down-to-earth, and amazingly true to keep you laughing and learning as you read through the book! Tips & Tricks to Enhance Reading Experience • Enter "G Whiz" after your favorite title to see if publication exists! ie) Harry Potter G Whiz • Enter "G Whiz 101" to search for entire catalogue! • If not found, request to have your choice created by using form on our website! • Combine your favorite titles to receive bundle coupons! • And, write a review when you're done to hop on the list of contributors! “Get ready for fun, down-to-earth, and amazingly true facts that keeps you learning as you read through the book” - G Whiz DISCLAIMER: Although the Author and Publisher strived to be accurate and verify all contributions by readers, due to the nature of research this publication should not be deemed as an authoritative source and no content should be used for citation purposes. All facts come with source URLS for further reading. This publication is meant for entertainment purposes to provide the best collection of facts possible. Refined and tested for quality, we provide a 100% satisfaction guarantee or your money back.

Anansi boys: His past marked by his father's embarrassing taunts and untimely death, Fat Charlie meets the brother he never knew and is introduced to new and exciting ways to spend his time.

Confronted by revelations about his past and future and determined to put a stop to the upcoming divine bloodbath, Shadow puts himself at the center of the battle between new and old gods.

Neil Gaiman! In this dramatic conclusion to the award-winning American Gods series, Shadow says his goodbyes and makes peace with a world that has changed forever.