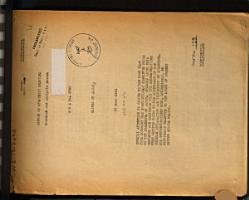 In Japan, it is well-known that there are mysterious documents that may be related to modern UFO phenomena. It is certain that they were written about two hundred years ago, long before 1947 (when the first UFO sighting was recorded). These documents state the details of an incident that occurred on a Japanese beach in 1803 and the description provided resembles modern UFO close encounters of the third kind. In most of the documents, a disk-shaped ship called Utsuro-bune (UFO?), a strange woman speaking an unknown language (alien?) and strange characters (alien hieroglyphs?) are depicted. At present, a total of twelve documents detailing the same incident have been found which is an indicator of the validity of the incident, given the high number. If the UFO-like craft described in the documents based on actual observations of UFOs in Japan two hundred years ago is verified, the documents can be considered as strong evidence of the existence of UFOs.From the viewpoint of folklore, the incident has been considered as part of the legends of Utsuro-bune (hollow ship in English) for a long time; these legends have been passed down in Japan, and Utsuro-bune is a ship based on the human imagination. However, following the arrival of UFO fever from the USA in 1947, a mystery emerged around how the disk-shaped ship depicted in the documents resembles a UFO to such an extent. Can it be considered the long-waited hard evidence of the existence of UFOs? This intriguing story has been known as the Utsuro-bune UFO legend in Japan.The purpose of this book is to document an exhaustive study of this Utsuro-bune UFO legend from scientific, historical, and folkloric viewpoints. How did the Japanese author of the documents in the Edo Period, which was two hundred years ago, imagine UFO-like shapes when the visual characteristics of a modern UFO could not possibly have been known at that time? Were the pictures of the Utsuro-bune UFO drawn based on an actual UFO sighting dating back to the Edo Period?This book will be the first, the only, and the most complete documentation of this mystery; it is available in English and employs principles of both science and reason. The reader will be fascinated by the bizarre circumstances of this mystery which can be summarized by the following question: "Why are ships similar to UFOs depicted in the ancient literature of the Edo Period, which took place two hundred years ago, in Japan?