The nuanced, definitive biography of one of the most controversial and widely misunderstood figures of our time: the woman running a historic campaign as the 2016 Democratic presidential nominee—Hillary Rodham Clinton. Drawing on hundreds of interviews with colleagues and friends and with unique access to campaign records, Pulitzer Prize-winning journalist and bestselling author Carl Bernstein has given us a book that enables us, at last, to address the questions Americans are insistently—even obsessively—asking: Who is she? What is her character? What is her political philosophy? And, what can we expect from Hillary if we elect her President of the United States?

Marilyn Laurie was a self-described "little Jewish girl from the Bronx" who became one of the world's top public relations counselors and the first woman in the top policy-making councils of a Fortune 10 company. Her career mirrored the social and political upheaval of the 20th century's last three decades. After helping launch Earth Day in 1970, she was hired by AT&T to encourage employee recycling. Marilyn: A Woman In Charge tells the behind-the-scenes story of how she who worked her way from that humble assignment into the corridors of power. When she died in 2010, Marilyn had received practically every award available to public relations practitioners. But few knew the tortuous path she journeyed to the top of her field. In a career bookended by systemic sexism and gender stereotyping, she refused to stay in the lane assigned to her by gender. When others dodged and weaved to avoid conflict, she ran towards problems, even at the risk of becoming associated with them. Her life story is a lesson in public relations leadership at the highest levels. It's a story of chance and cunning, of heady highs and humbling lows, and the gift of grace and resilience. A second-generation immigrant, Marilyn was raised in the Bronx and never lost the flat accents and directness of its streets and alleyways. She attended Barnard College in the second half of the 1950's, where she learned that women need not live their lives solely through husband and children. She graduated intending to apply her full capacities to meaningful goals outside herself. She first found goals worthy of her full capacities in environmentalism. Then, almost by accident, she found such goals at AT&T. When she joined the company, it was literally "The Telephone Company," handling more than nine out of ten phone calls in the U. S. For nearly a century, its mission had been to put a telephone within an arm's reach of every household. A regulated monopoly, its very existence depended on earning and keeping the public's trust, a goal she believed depended more on what the company did than what it said. She was also there when AT&T lost its footing in the wake of technological, social, and political change, and she worked just as hard to help it regain its balance. Based on the author's first-hand experience, archival files, and interviews with friends, colleagues, and family members, Marilyn: A Woman In Charge reveals the behind-the-scenes story of a woman who broke through the proverbial glass ceiling within a great American company. It describes how she won and kept a seat at the policy-making table, how she defined the role of public relations, and how she dealt with crises arising both from the company's missteps and from the agendas of special interests. 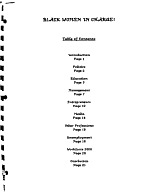 Chicanas in Charge offers profiles, in the form of oral histories, of the careers of female community and political leaders from the Chicano community in Texas.

Through the story of a portrait of a woman in a silk dress, historian Zara Anishanslin embarks on a fascinating journey, exploring and refining debates about the cultural history of the eighteenth-century British Atlantic world. While most scholarship on commodities focuses either on labor and production or on consumption and use, Anishanslin unifies both, examining the worlds of four identifiable people who produced, wore, and represented this object: a London weaver, one of early modern Britain’s few women silk designers, a Philadelphia merchant’s wife, and a New England painter. Blending macro and micro history with nuanced gender analysis, Anishanslin shows how making, buying, and using goods in the British Atlantic created an object-based community that tied its inhabitants together, while also allowing for different views of the Empire. Investigating a range of subjects including self-fashioning, identity, natural history, politics, and trade, Anishanslin makes major contributions both to the study of material culture and to our ongoing conversation about how to write history.

Selected by Choice as a 2012 Outstanding Academic Title Awarded a 2012 PROSE Honorable Mention as a Single Volume Reference/Humanities & Social Sciences A Companion to Women in the Ancient World presents an interdisciplinary, methodologically-based collection of newly-commissioned essays from prominent scholars on the study of women in the ancient world. The first interdisciplinary, methodologically-based collection of readings to address the study of women in the ancient world Explores a broad range of topics relating to women in antiquity, including: Mother-Goddess Theory; Women in Homer, Pre-Roman Italy, the Near East; Women and the Family, the State, and Religion; Dress and Adornment; Female Patronage; Hellenistic Queens; Imperial Women; Women in Late Antiquity; Early Women Saints; and many more Thematically arranged to emphasize the importance of historical themes of continuity, development, and innovation Reconsiders much of the well-known evidence and preconceived notions relating to women in antiquity Includes contributions from many of the most prominent scholars associated with the study of women in antiquity

Both Muslims and non-Muslims see women in most Muslim countries as suffering from social, economic, and political discrimination, treated by law and society as second-class citizens subject to male authority. This discrimination is attributed to Islam and Islamic law, and since the late 19th century there has been a mass of literature tackling this issue. Recently, exciting new feminist research has been challenging gender discrimination and male authority from within Islamic legal tradition: this book presents some important results from that research. The contributors all engage critically with two central juristic concepts; rooted in the Qur’an, they lie at the basis of this discrimination. One refers to a husband’s authority over his wife, his financial responsibility toward her, and his superior status and rights. The other is male family members’ right and duty of guardianship over female members (e.g., fathers over daughters when entering into marriage contracts) and the privileging of fathers over mothers in guardianship rights over their children. The contributors, brought together by the Musawah global movement for equality and justice in the Muslim family, include Omaima Abou-Bakr, Asma Lamrabet, Ayesha Chaudhry, Sa‘diyya Shaikh, Lynn Welchman, Marwa Sharefeldin, Lena Larsen and Amina Wadud.

Women in Peace Politics explores the role of women as agents and visionaries of peace in South Asia. Peace is redefined to include in its fold the attempt by women to be a part of the peace making process, reworking the structural inequalities faced by them and their struggle against all forms of oppression. This volume, the third in the series of the South Asia Peace Studies, deals with the myriad dimensions of peace as practised by South Asian women over a period of time. It chronicles the lives of "ordinary" women—their transformative role in peace and an attempt to create a space of their own. Their peace activism is examined in the historical context of their participation in national liberation movements since the early twentieth century. The articles in the collection adopt a new approach to understanding peace—as a desire to end repression that cuts across caste, class, race and gender and an effort on the part of women to transform their position in society. This compilation would interest a wide readership besides students and scholars of human rights, peace and security studies, politics and international relations. .

“An insightful look at the history of sexual mores and politics and how we got to such a contentious place.” —Booklist Perhaps if the Pill had never been invented, American politics would be very different today, Nancy L. Cohen writes, as she takes us on a gripping journey through the confounding and mysterious episodes of our recent politics to explain how and why we got to this place. Along the way she explores such topics as why Bill Clinton was impeached over a private sexual affair; how George W. Bush won the presidency by stealth; why Hillary lost to Obama; why John McCain chose Sarah Palin to be his running mate; and what the 2012 presidential contest indicated about America today. She exposes the surprising role of right-wing women in undermining women’s rights, and explains how liberal men were complicit in letting it happen. Cohen uncovers the hidden history of an orchestrated, well-financed, ideologically powered shadow movement to turn back the clock on matters of gender equality and sexual freedom and how it has played a leading role in fueling America’s political wars—and explains how we can restore common sense and sanity in our nation’s politics. “In her critique of bipartisan extremism, historian Cohen expertly details its rise within the Democratic and Republican parties by mining seven presidential elections . . . an impressive contribution to the political dialogue.” —Publishers Weekly