Nearly one hundred years ago, a desperate young woman crawled ashore on a desolate arctic island, carrying a terrible secret and a mysterious, emerald-encrusted cross. A century later, acts of man, nature, and history converge on that same forbidding shore with a power sufficient to shatter civilization as we know it. Army epidemiologist Frank Slater is facing a court-martial, but after his punishment is mysteriously lifted, Slater is offered a job no one else wants—to travel to a small island off the coast of Alaska and investigate a potentially lethal phenomenon: The permafrost has begun to melt, exposing bodies from a colony that was wiped out by the dreaded Spanish flu of 1918. Frank must determine if the thawed remains still carry the deadly virus in their frozen flesh and, if so, ensure that it doesn’t come back to life. Frank and his handpicked team arrive by helicopter, loaded down with high-tech tools, prepared to exhume history. The colony, it transpires, was once settled by a sect devoted to the mad Russian monk Rasputin, but there is even more hiding in the past than Frank’s team is aware of. Any hope of success hinges on their willingness to accept the fact that even their cutting-edge science has its limits—and that the ancient wisdom of the Inuit people who once inhabited this eerie land is as essential as any serum. By the time Frank discovers that his mission has been compromised—crashed by a gang of reckless treasure hunters—he will be in a brutal race against time. With a young, strong-willed Inuit woman by his side, Frank must put a deadly genie back in the bottle before all of humanity pays the price. The Romanov Cross is at once an alternate take on one of history’s most profound mysteries, a love story as unlikely as it is inevitable, and a thriller of heart-stopping, supernatural suspense. With his signature blend of fascinating history and fantastic imagination, critically acclaimed author Robert Masello has once again crafted a terrifying story of past events coming back to haunt the present day . . . and of dark deeds aching to be unearthed. Praise for The Romanov Cross “In this fascinating, funny, and frightening supernatural thriller, [Robert] Masello skillfully weaves together the story of the deaths of the Russian royal family with the possibility of a new worldwide influenza pandemic. . . . Toss in a pack of slavering wolves, the undead, and a chilling ending, and the result is a terrific, can’t-put-it-down read. Fine prose and plotting help solidify Masello’s position at the top of this crowded subgenre.”—Publishers Weekly “A former Army epidemiologist contends with greedy locals and the harsh Alaskan terrain in order to prevent the recurrence of a deadly pandemic. . . . Masello weaves several disparate genres—medical thriller, historical novel, ghost story—into a coherent whole. A delicious sense of creeping dread permeates the first act, greatly enhanced by its setting in the stark but beautiful landscape of northwestern Alaska. . . . Tense, taut and impossible to put down.”—Kirkus Reviews (starred review) From the Hardcover edition.

Over the course of more than three centuries of Romanov rule in Russia, foreign visitors and residents produced a vast corpus of literature conveying their experiences and impressions of the country. The product of years of painstaking research by one of the world’s foremost authorities on Anglo-Russian relations, In the Lands of the Romanovs is the realization of a major bibliographical project that records the details of over 1200 English-language accounts of the Russian Empire. Ranging chronologically from the accession of Mikhail Fedorovich in 1613 to the abdication of Nicholas II in 1917, this is the most comprehensive bibliography of first-hand accounts of Russia ever to be published. Far more than an inventory of accounts by travellers and tourists, Anthony Cross’s ambitious and wide-ranging work includes personal records of residence in or visits to Russia by writers ranging from diplomats to merchants, physicians to clergymen, gardeners to governesses, as well as by participants in the French invasion of 1812 and in the Crimean War of 1854-56. Providing full bibliographical details and concise but informative annotation for each entry, this substantial bibliography will be an invaluable tool for anyone with an interest in contacts between Russia and the West during the centuries of Romanov rule. 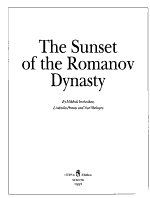 A vivid and original portrait of the entire Romanov family, who shaped Russian history and politics for three centuries and whose legacy still sparks the public’s imagination. >

A 12-WEEK NEW YORK TIMES BESTSELLER "Helen Rappaport paints a compelling portrait of the doomed grand duchesses." —People magazine "The public spoke of the sisters in a gentile, superficial manner, but Rappaport captures sections of letters and diary entries to showcase the sisters' thoughtfulness and intelligence." —Publishers Weekly (starred review) From the New York Times bestselling author of The Last Days of the Romanovs and Caught in the Revolution, The Romanov Sisters reveals the untold stories of the four daughters of Nicholas and Alexandra. They were the Princess Dianas of their day—perhaps the most photographed and talked about young royals of the early twentieth century. The four captivating Russian Grand Duchesses—Olga, Tatiana, Maria and Anastasia Romanov—were much admired for their happy dispositions, their looks, the clothes they wore and their privileged lifestyle. Over the years, the story of the four Romanov sisters and their tragic end in a basement at Ekaterinburg in 1918 has clouded our view of them, leading to a mass of sentimental and idealized hagiography. With this treasure trove of diaries and letters from the grand duchesses to their friends and family, we learn that they were intelligent, sensitive and perceptive witnesses to the dark turmoil within their immediate family and the ominous approach of the Russian Revolution, the nightmare that would sweep their world away, and them along with it. The Romanov Sisters sets out to capture the joy as well as the insecurities and poignancy of those young lives against the backdrop of the dying days of late Imperial Russia, World War I and the Russian Revolution. Helen Rappaport aims to present a new and challenging take on the story, drawing extensively on previously unseen or unpublished letters, diaries and archival sources, as well as private collections. It is a book that will surprise people, even aficionados.

For readers of Philippa Gregory and Alison Weir comes a dramatic novel of the beloved Empress Maria, the Danish princess who became the mother of the last Russian tsar. “This epic tale is captivating and beautifully told.”—Lisa Wingate, New York Times bestselling author of Before We Were Yours Barely nineteen, Minnie knows that her station in life as a Danish princess is to leave her family and enter into a royal marriage—as her older sister Alix has done, moving to England to wed Queen Victoria’s eldest son. The winds of fortune bring Minnie to Russia, where she marries the Romanov heir, Alexander, and once he ascends the throne, becomes empress. When resistance to his reign strikes at the heart of her family and the tsar sets out to crush all who oppose him, Minnie—now called Maria—must tread a perilous path of compromise in a country she has come to love. Her husband’s death leaves their son Nicholas as the inexperienced ruler of a deeply divided and crumbling empire. Determined to guide him to reforms that will bring Russia into the modern age, Maria faces implacable opposition from Nicholas’s strong-willed wife, Alexandra, whose fervor has led her into a disturbing relationship with a mystic named Rasputin. As the unstoppable wave of revolution rises anew to engulf Russia, Maria will face her most dangerous challenge and her greatest heartache. From the opulent palaces of St. Petersburg and the intrigue-laced salons of the aristocracy to the World War I battlefields and the bloodied countryside occupied by the Bolsheviks, C. W. Gortner sweeps us into the anarchic fall of an empire and the complex, bold heart of the woman who tried to save it. Praise for The Romanov Empress “Timely . . . [Gortner’s] ability to weave what reads as a simple tale from such complex historical and familial storylines is impressive. . . . Maria’s life as a royal reads like a historical soap opera.”—USA Today “Gortner, an experienced hand at recreating the unique aura of a particular time and place, will deftly sweep historical-fictions fans into this glamorous, turbulent, and ultimately tragic chapter in history.”—Booklist (starred review) “Mesmerizing . . . This insightful first-person account of the downfall of the Romanov rule . . . is the powerful story of a mother trying to save her family and an aristocrat fighting to maintain rule in a country of rebellion.”—Publishers Weekly “A twist on the tragic story you’ve heard many times before.”—Bustle

The late-night visit of a Russian Orthodox priest draws Yuri Nevsky into a struggle by would-be leaders of post-Soviet Russia to possess a treasure cache created for Czar Nicholas II to use in an exile that never came. At once he is caught up in a lethal web with strands stretching from Imperial Russia, to Paris in the '20s, Nazi-held Odessa in 1942, and the Kirgiz Steppe in 1952. Scheming, betrayals, tangled cross-purposes, and murders in the past and present confuse the hunt and threaten to cost him his life. If he's to survive and avenge the murder of the gentle priest, he must summon up all his cunning to solve the mystery of the three treasure cubes before the contenders gather to plunder the final one marked Anastasia Nikolayevna!

Rappaport, an expert in the field of Russian history, brings you the riveting day-by-day account of the last fourteen days of the Russian Imperial family, in this first of two books about the Romanovs. Her second book The Romanov Sisters, offering a never-before-seen glimpse at the lives of the Tsar's beautiful daughters and a celebration of their unique stories, will be published in 2014. The brutal murder of the Russian Imperial family on the night of July 16–17, 1918 has long been a defining moment in world history. The Last Days of the Romanovs reveals in exceptional detail how the conspiracy to kill them unfolded. In the vivid style of a TV documentary, Helen Rappaport reveals both the atmosphere inside the family's claustrophobic prison and the political maneuverings of those who wished to save—or destroy—them. With the watching world and European monarchies proving incapable of saving the Romanovs, the narrative brings this tragic story to life in a compellingly new and dramatic way, culminating in a bloody night of horror in a cramped basement room.

Over the course of more than three centuries of Romanov rule in Russia, foreign visitors and residents produced a vast corpus of literature conveying their experiences and impressions of the country. The product of years of painstaking research by one of the world's foremost authorities on Anglo-Russian relations, In the Lands of the Romanovs is the realization of a major bibliographical project that records the details of over 1200 English-language accounts of the Russian Empire.Ranging chronologically from the accession of Mikhail Fedorovich in 1613 to the abdication of Nicholas II in 1917, this is the most comprehensive bibliography of first-hand accounts of Russia ever to be published. Far more than an inventory of accounts by travellers and tourists, Anthony Cross's ambitious and wide-ranging work includes personal records of residence in or visits to Russia by writers ranging from diplomats to merchants, physicians to clergymen, gardeners to governesses, as well as by participants in the French invasion of 1812 and in the Crimean War of 1854-56.Providing full bibliographical details and concise, informative annotation for each entry, this substantial bibliography will be an invaluable tool for anyone with an interest in contacts between Russia and the West during the centuries of Romanov rule. This work was published by Saint Philip Street Press pursuant to a Creative Commons license permitting commercial use. All rights not granted by the work's license are retained by the author or authors.